Core Control for Strength and Power in Athletics 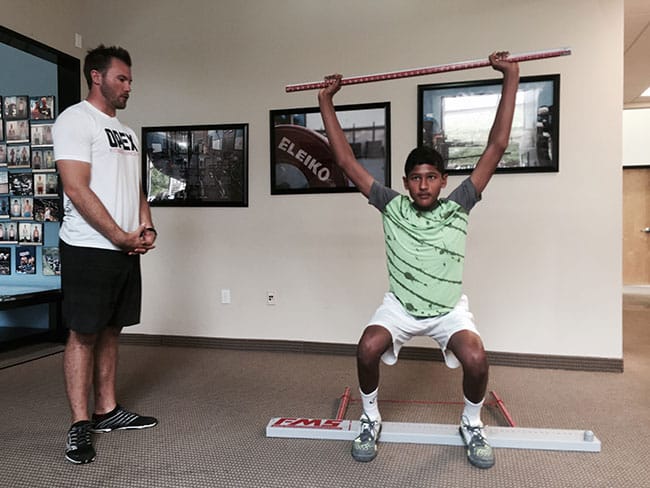 A lot of people come to me with rehab questions, and rightfully so.  I’ve sort of gained a reputation for being the “rehab” guy.  The truth though, is that I’m actually a performance enhancement coach.  I just happened to have been lucky enough to have a dozen or so mentors who were all experts in various fields, all of whom except one had at least one doctorate.  This gave me a wide variety of philosophies to draw upon in order to become a complete and total coach with a very deep understanding of how to enhance performance.  While I do love helping people move better, get out of pain and in general live more healthy functional lives, my biggest passion is building world class athletes, and that’s what I truly do best.

What if tomorrow you had a world-class athlete walk into your facility and ask you to take them to the next level.  Let’s say that next level is a potential scholarship for college, or perhaps multi-million dollar potential.  Are you comfortable bearing that responsibility?  What if that athlete was only 14 and already world class? What if that athlete had NO idea how to move athletically in a controlled environment, and had a history of injury and pain, yet was STILL world class? What would you do? Refer out? Turn away business? Tell them, “Sorry, I’m not good enough as a coach to help you.”  What if they were DISCHARGED into your care by a very competent physical therapist and strength coach?  What’s your first step? Test their back squat to deadlift ratio? Do you check posture? Do you give an energy systems test on the assault bike?  Hopefully this case study and article gives you some insight into what it takes to take an already world-class athlete, and make them better.  After all, it’s easy to take someone who knows nothing and build them into something…or is it?

In comes Sangeet Sridhar.  Sangeet first came to me in the beginning of 2015 as a discharged patient from Jeff Beran, a physical therapist I work with out of Evolution Physical Therapy.  Sangeet had been seeing Jeff for a while regarding some issues/injuries from playing so much tennis.  Jeff did an absolutely awesome job getting him back to the condition in which I could work my magic.  For those who are familiar with the Functional Movement Screen I’ll give you some background on Sangeet.  He scored a 9 on the FMS in his initial assessment.  For those not as familiar with the FMS, first and foremost the FMS is NOT an assessment.  It’s just a screen, similar to a blood pressure test. Putting someone through the FMS takes 10 minutes at the most, and gives potential red flags for movement issues that can translate to a reduced performance in sport.  Much like a high blood pressure just gives a red flag to potential heart conditions yet doesn’t tell us WHY blood pressure is high, the FMS does not tell us WHY an athlete moves the way they do.  That’s where individualized assessments MUST come into play if you want to produce the best results for your athlete, regardless of sport.

To help you conceptualize the kind of athlete Sangeet is and is continuing to become, he was ranked among the top in the world when I got him.  He ranked around 400th in the world as a 14 year old, and top 5 in the country.  Right before I got him he went up against the number one NCAA tennis player who had 6 years experience on him, and while he did lose to him, he wasn’t crushed.  He kept up very well and it was a very close match.  So what would you do if this kind of athlete came to you asking for help? Injury prone, can’t move well, and not to mention his adrenals were shot based on HRV data we obtained.  He was playing tennis 5 hours per day, 5-6 days per week.

Don’t let the industry fool you. There is no such thing as an “injury prevention” specific program.  I say this because as coaches it’s OUR job to make sure EVERY program reduces injury potential, while simultaneously improving movement, positions AND performance.  This is perhaps why many people have sought me out when they’re hurt. Taking an athlete who moves amazingly well with no injuries or pain to worry about, and creating a better athlete is relatively easy.  Taking an athlete with no context towards proper movement, positions, or perhaps an injury requires a deeper understanding of coaching.  A deeper understanding of which I hope this article gives you.

First and foremost, do not train into pain.  That’s one of my principles that have worked great for me over the years. Pain is tricky, it can come from a variety of stimuli, sometimes movement causes pain, and sometimes it doesn’t.  If bad movement caused pain, then lets face it, the majority of people trying to snatch would be screaming in agony. That doesn’t mean they should be snatching though.  So next comes understanding how to contraindicate an athlete for specific movements.  Sangeet came to me with no capacity to squat, hip hinge, do push ups, or even crawl properly.  So instead of just throwing axel bars, barbells and kettlebells we started with things that were going to create a foundation of movement.  One thing we used a lot in the beginning of his program was the cable machine and Gray Cook bands.  If you don’t have a cable machine then at the very least get some Gray Cook bands.

When I look at developing athletes I look at the areas they fall apart, so first I watched him move in a controlled environment.  Then I looked at his video on the court where he was playing.  I took into account things like the type of surface he played on, the differences in movement when he played on different surfaces, and I looked at how he reacted to difficult situations.  All of these gave me clues regarding what I needed to do with him.  First though, if part of our job as coaches is to teach our athletes how to get into better positions, we have to consider a continuum, which helps guide our thoughts.  Consider this continuum: subconscious dysfunction → conscious dysfunction → conscious function → subconscious function.   The first step is generally you might see, which is akin to an athlete just having no clue that their knees should not cave in when they jump.  After you create some context, regardless to whether you use an internal or external cue, the athlete should now be aware that it’s not correct to have the knees cave in during a jump.  That’s a conscious dysfunction, but next you have to find a way to give them the tools to own their position.  That’s the key, helping athletes OWN their own position.

This “owning” comes from a different continuum that I use: isolate → innervate → integrate.  For some, the knees might cave in during a jump because there might actually be a glute medius weakness.  I will argue until I’m blue in the face though that MOST cases this is NOT the issue unless there’s an injury or pain to the region.  So the next step is innervation.  Isolation should be simple to understand, you isolate a muscle, but innervation is usually more complex for coaches to grasp.  Innervation can be squatting, but it could also be side plank clamshells.  To determine what innervation is, you must first know what integration is.  Integration for an Olympic weightlifter might be squatting, but for a tennis player, squatting is innervation.  Integration is essentially getting your athlete to their chosen sport or activity.  Innervation for Sangeet was doing some reactive neuromuscular training (RNT) in various positions to help him own his movement on the court.  This RNT is a fancy way of saying encouraging a mistake in a safe controlled manner so the athlete can feel and correct it.  For some, it might mean putting a band around their knees when they squat, so they can FEEL the collapse, and self correct.  For an athlete that spends A LOT of time in a split stance, such as an overhead rotational athlete like tennis or baseball athletes, half kneeling is a great place to start.  A half kneeling DB curl to press may seem simple, but to an athlete that can’t lunge very well, which leaves them unable to return hard serves, change directions efficiently, or even split jerk very well, a half kneeling curl to press with one arm can be a GAME CHANGER.

After 30 days of essentially teaching Sangeet to own different positions, I ran him through another FMS and his score went from a 9 to a 13.  More importantly though, his feedback was he felt better on the court already, felt more athletic, and was able to make the plays he couldn’t have made a month prior.  That’s the important thing to take away from that.  In one month, just 4 weeks of training, athleticism went up, performance was going up, and his confidence was higher.  That’s what “corrective” exercise is really about.  It’s not about boring external rotations with a dumbbell; it’s about getting you back into the best condition possible in the shortest amount of time.  In that essence, EVERY aspect of a great program is a corrective exercise.  Segmented clean deadlifts are a corrective exercise for positions in the first pull of a clean.  I also use segmented clean or snatch deadlifts to help rehab injured shoulders.

While I was pleased that 13 was a better score, it still wasn’t quite where he needed to be based on his goals.  So we continued to work on things that he could do well.  For starters, he could hip hinge now, so we hammered out RDL’s like they were no one’s business.  We also incorporated some half kneeling cable exercises like pallof presses, anti-rotation presses with a Gray Cook bar, chops and lifts.  I incorporated a lot of various exercises from the developmental kinesiology school of thought that I learned from a few of the Dynamic Neuromuscular Stabilization courses I took.  We used a few Postural Restoration Institute drills to help him create more acceptable asymmetries, because after all, some asymmetry is normal, but too much can be detrimental to performance.  I re-tested his FMS 2 months later, and he was able to score a 15.  I knew I was on the right track with him, because the qualitative feedback was that he was getting better on the court, in the gym his numbers were getting better, and his positions were better.  Not to mention his ranking jumped up over 100 points by April.  He was around 300th in the world and by this time was number 1 in the country.  He had less pain, less propensity towards injury, and his confidence was higher.

In June I ran him through the FMS again and he scored a 16.  He no longer had any detrimental asymmetries in movement; he was weighing in at 146 pounds (he came to me at 126 pounds) and was controlling himself much better on the court.  As a matter of fact, he just got back from Sweden and Africa where he won an International Tennis Federation tournament, which put him at 275th in the world, and still number one in the country.  With his eyes on the Junior Wimbledon in 2016 as a 15 year old, we still have a long ways to go, but I’m 100% confident in his abilities as an athlete, and my abilities as a coach to get him to that level.

The Model Wars - By Carl Hardwick

How Much Should I Be Making? Anatomy of a Fitness Pro Pt. 7

How Complex Does My Program Design Need to Be? Anatomy of a Fitness Pro Pt. 6

How Social Media Savvy Should I Be? Anatomy of a Fitness Pro Pt. 5