United By Fitness: A Marriage Proposal at OPEX Horizon West

Samantha Carlucci and Gavin Metz Tie the Knot in a Unique Way.

Gavin Metz, a coach at OPEX Horizon West, recently proposed to his long time girlfriend Samantha Carlucci shortly after the second workout in the 2017 Zombie Wods on December 9th, 2017. A fitting setting for two ferocious competitors who are both intimately connected by their shared views of fitness.

The couple actually met each other initially at OPEX Horizon West where they quickly bonded over their past stressful relationships. Gavin at the time happened to be (and still is) one of the coaches at OPEX Horizon West. The relationship began, albeit unknown to them, as a close friendship. For the better part of a year, the two would continue to grow closer and communicate more frequently. It finally reached a point where everyone else in the gym suspected they were dating and constantly made incorrect references to them as a couple. However, this spurred them to consider each other as romantic partners rather than close friends.

Sensing that there was something more to the relationship, they both decided to officially start dating as Gavin and Samantha respectively observed, Gavin: “It was really awkward for a little while, but then we decided to give it a try and never looked back since.” Samantha: “we’re looking at each other like, what are we doing? Why are we not together? This is ridiculous! And it kind of just evolved from there, and both of us broke free from what we were doing, and toed the line. Does he like me, does she like me? How is this gonna go? And eventually it just happened.”

As it turns out, they were a perfect match for each other. Their passion for fitness and their identity as athletes has only helped them grow even closer over time. They do everything together, including meal prepping and even local CrossFit Competitions. Together, they would describe their relationship as one series of healthy competitions in which one tries to best the other in order to continue to grow stronger and more capable as a couple.

They channel their restlessness and passion for fitness into partner competition events like the Zombie WoDs, in which Gavin saw a unique opportunity, “Her lucky number is 17, so she really wanted to get engaged in 2017, and with us meeting at the gym and working out and that being such a big part of our lives, I figured even though it’s not necessarily romantic, that would be the perfect spot for us to do that.”

Gavin decided to make the proposal to Samantha following the second workout of the day at the competition. However, the stress of preparing such a big moment of his fiance-to-be clearly had a negative athletic performance on Gavin, as Samantha noticed, “There’s good picture somewhere, I don’t know, of me screaming at him. Because he has to finish his reps so I can get to the bar before this time cap, and I am ripping him up one side and down the other, like “You’re dogging it, I know you’ve got more than that. What are you doing?” But as Samantha discovered minutes later, Gavin was up to something.

Just after the completion of the event, Gavin walked away and quickly came back with his proposal ring for Samantha. 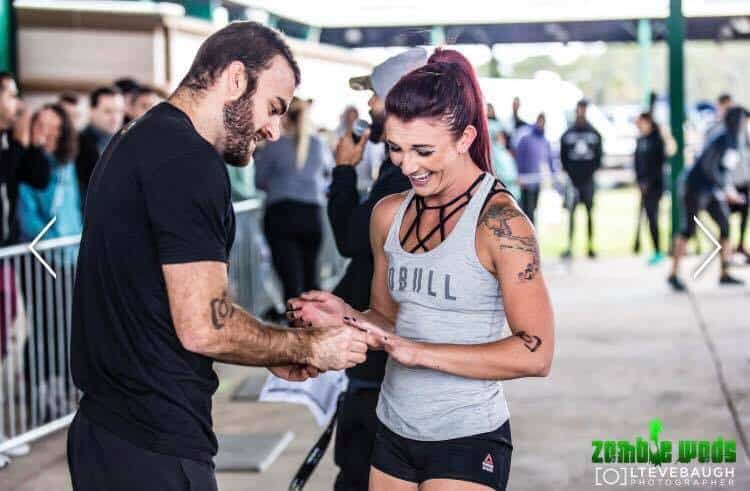 Gavin, who was clearly out of breathe from the event, attempted to remember what exactly he tried to memorize for the proposal, but instead improvised and told Samantha that exactly what he wanted and felt, “Babe!, I love you so much! Let’s get married!”. If you’ve read this far, you know exactly how this story ends. She said yes. 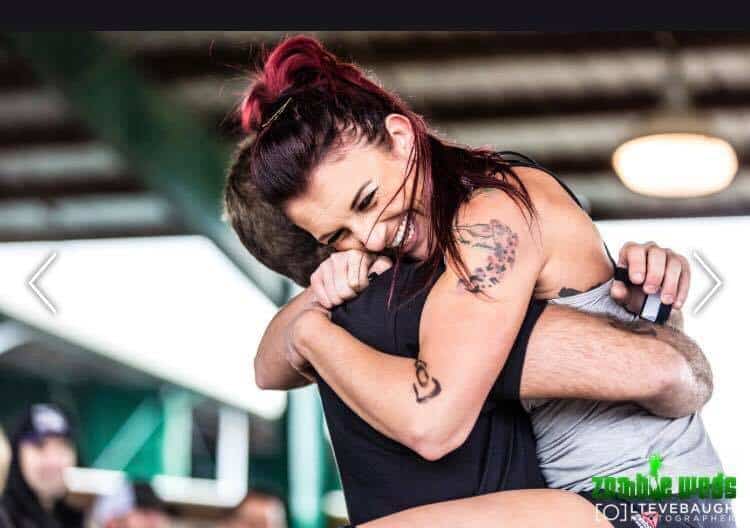 The two are now soon to be married and will continue to support each other in the gym, on the competition floor, and in life.

Their favorite meal to eat together? Wine and cheese.