Reflections on Competitions in CrossFit 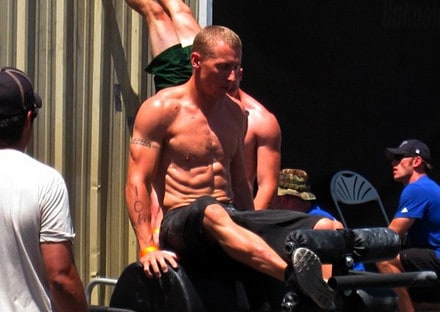 We had the usual 15 deg Celsius Chinook winds in December with 3 feet of snow a few days to follow.

I was nestled into my basement gym, experimenting with clients and fitness – to its depths.

There was no stone un-turned, I was into it, grabbing all that I could and playing with everything.

My trade was as a strength coach. Daily I was putting my clients through workouts and fitness programs tailored to what they needed.

Be it junior hockey, bodybuilding, physique fitness, motherhood, skeleton – you name it – I was doing it.

Making mistakes and learning but making gains in all I touched.

My own journey of fitness at the time was a mix of looking good naked with experimentation’s in diet protocols, weights and running.

One of my friends and colleagues introduced me to CrossFit.com. I looked, dabbled, read all the articles, journals, and consumed it all as I do with everything.

I gave it a “chance”. Many others around me did not. As with all things I come into play with, I am patient and all consuming of it for a while before making statements as to its validity and truth. I dissect things to their depths before making truths happen. This was done through me, others, groups, reading, asking, and more importantly, time.

July 2005 marked the first “competitive” fitness workout I did. It was gloriously;

A “competitive” workout was new to me. I had done MANY, MANY workouts prior to this.

The only competition previous to this was between other guys in conversation on how much they can lift, about what athletes are lifting and the odd pissing contest on max effort days for squatting.

So this new competitive workout regime was interesting.

As with others who were new to the movement – there was chatter on how they gave up other shit as they could not handle all the other things plus this new fitness format.

I was the same, I continued to run, do strongman work and the odd bodybuilding routine when there was not enough squatting in the .com workouts.

As my nervous system developed, I began to be able to go “deeper”. I am not sure how to explain this more (we now understand it physiologically) but I went to deep, dark places. 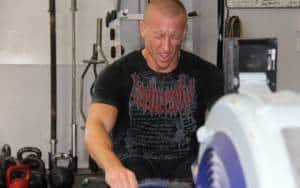 It was at this time between 2005 and up to and just after I won the CrossFit Games in 2007 that I went to these dark places many times.

I was in bed as soon as I had a chance to review the workout, lying there for minutes going through my head how to compete in this “training session” against others the next day who I have never met but now “knew”. I’d be up at 3:45am, move a little in the facility (the old OPT), then warm up specifically and “hit it”.  And hit it I did.

I went after each workout with one thought in my head, “NO ONE will beat me.” I visualized complete failure if I did not uphold the highest or best time of the day.

What drove me was the chance to be the best at something, and this thing that I was doing gave me a fighting chance.

Day after day, I would win, or be high in my own standings. YES, I would search through all 465 comments on the important days to see where I stood.

(The psychology behind this I will for sure explain in a book some day as it will help others for sure, but the complete story is not told)

Competitive fitness to me was just this. What I was doing day in and day out.

My day to day at the time was still as a coach. I was using parts of the new methods, I was learning and applying them to what I knew worked for people and their individual goals.

It was individualized, meeting them where they are, but upgraded as I learned and applied these pieces to myself. 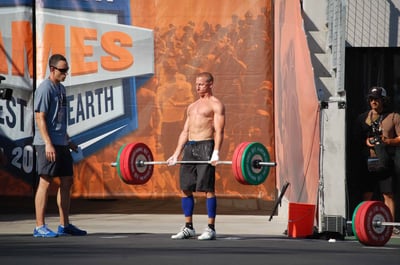 I was performing this way in my own little world, sharing the intensity and what was going on behind the scenes with very, VERY few.

My wife would even see the look on my face when our families would ask what I am into for my own fitness right now.

We could not explain in all honesty HOW I was competing against others in a workout.

And YES, there is a world championship for it, and YES, its quite popular and people want to do it.

Once I competed against others on a larger stage I was entering into my peak physical potential and I knew it. But I had reserves of personality traits that I think helped me get through a few more years.

At the time I started competing at the Ranch in Aromas I was 33 years of age.

Traits of intelligence in program design, awareness of pushing and pulling oneself in physical training intensely and a DEEP desire to figure out my purpose was what I think helped me along the way.

These traits also gave me the passion to start sharing. I was creating a new project for me to consume and be patient with – MASTERY.

How can I possibly share all those highs and lows, all the experiences, all the pain and anguish, all the injuries and ups and downs with others who want it, need it, desire it.

They were inspired by it so we shared it, any way we could.

This all began with our own local competitions in late 2007 and into the sectionals that created some guidelines for those competitions there forward in 2010+.

We shared this with our clients, each of them got a taste of it. I could see things VERY clearly. I was watching myself analyzing 10 year programs on how to make people better at this sport.

Also, I began going a little crazy trying to understand what was going on with these people as they began this journey EARLIER than I did.

It all came together when I began teaching other coaches and athletes about the sport.

Everything that I knew I gave to others to help them on their journey.

I was patient, and I withheld a lot of information to the clients, for reasons they will never know and only coaches understand.

Information on long term development, on ability, on willingness to overcome.

I could see things in others and what they needed and only discussed it with a few others in my group at the time.

These people have gone on to persevere and help others tremendously with the same keen eye today in competitive fitness.

But there is SOMETHING about what I knew to be true that I could not explain. I am still discovering ways to explain that today.

Having others competing in this new sport now with structure of The Opens into Regionals and onto Games was refreshing.

It became more refined. Arguments still abound freely about design, purpose, logistics, reasoning, etc…as with all large and fast fitness movements – this is pure and expected.

What once began as an online workout for me in my eyes, my little secret, has largely been let out of the bag.

A secret of mine no more.

My family and I are proud to say, and not embarrassed by our experiences early on in the workout competition environment.

The idea that it is passed onto millions now shows the strength of that idea. The movement of competition in fitness has taken tremendous leaps and bounds, & its obvious and does not need to be covered.

As we have just watched athletes take part in the 10th year of the CrossFit Games, the learning I wish to apply at this point in time is my story of competitive fitness.

Not the one about me, but how it was done, how it was applied and how others can aspire to go after something, WHILE recognizing what drives them.

For you it might be popularity, and if it is, I would go back to the drawing board.

If it’s max physical potential, I’d say hold on, it will be a bumpy ride.

And if it’s a search for purpose as it was in mine, the story will take a while to be told, so be patient, things will reveal themselves to you over time as you compete more.

Learn through history, be present when you train, and look excited towards the future.

Here is hoping that my story and message can inspire others to compete and learn.