Noticing From The Games; Scoring Potential 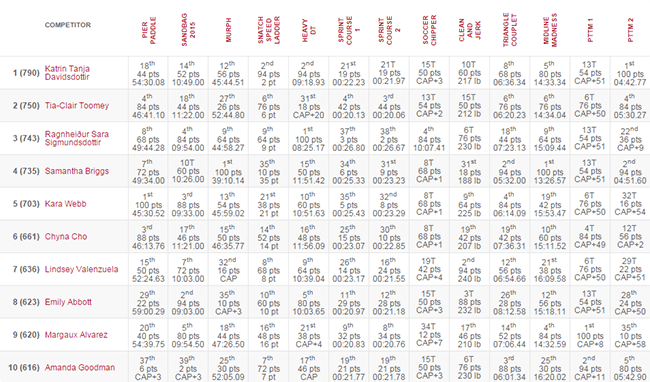 In an alternative scoring method, where the 13th-place tie is given 0-points versus 54-points in PTTM1, you see how drastically the leaderboard shifts. Notably a different champ is crowned and Kara Webb stands on the podium.

And to be clear, the 13th-place tie is being given 0-points because they failed to complete a single successful repetition.  In previous events, namely the clean and jerk max, when competitors failed to complete a repetition they received 0-points. For instance, Ben Garard, Travis Williams, and Joe Scali all failed to complete a successful attempt. Instead of receiving 8-points on a tie for 36th-place, they all received 0 points. (Side note; imagine if Matt Fraser misses his second attempt on the clean and jerk max. He then joins the other gentlemen with 0-points. All only things being equal Fraser ends the competition with 795 overall points, still finishing second in the Games, mind you. However, the drama around a podium race is negligible as Ben Smith truly walks away with the title at 915 overall points).

I liked the scoring system this year. It rewarded exponential points to top finishers and allowed for major shifts across the leaderboard. I simply think PPTM1 was poorly conceived and no one in Games management saw the tie-breaker coming at that scale. Perhaps even a last minute call was made during PTTM2 in terms of how to handle scoring of 13th-place; 54-points each or 0-points each?

Let me know your thoughts on this.

Movement Assessment and the Fitness Coach

How to Assess Cardiovascular Fitness - 2 Tests

The Fitness Assessment Form: How to Create Your Own